Toxoplasmosis is a disease caused by the single-celled parasite Toxoplasma gondii (T. gondii). It is one of the most common parasitic diseases and infects nearly all warm-blooded animals, including pets and humans. Although cats are a necessary part of the life cycle of T. gondii, the parasite rarely causes clinical disease in them. While T. gondii seldomly causes significant symptoms in healthy adults either (see below for exceptions), the Centers for Disease Control and Prevention (CDC) has recently identified toxoplasmosis as one of five neglected parasitic infections of

people due to its high prevalence. More than 60 million people in the U.S. are thought to be infected.

The life cycle of T. gondii is complex and involves two types of hosts — “definitive” hosts in which the parasite reproduces and forms eggs (called oocysts), and “intermediate” hosts in which it reproduces by making clones of itself, which cluster inside cysts. Wild and domestic cats are the only definitive hosts for T. gondii. When a cat ingests infected prey or raw meat, the parasite is released from cysts into the cat’s digestive tract, where it reproduces and produces oocysts. Infected cats then excrete these oocysts in their feces by the millions. Newly exposed cats usually begin shedding oocysts three to 10 days after consuming infected tissue, and continue shedding for around 10 to 14 days. Oocysts are very hardy and may survive in the environment for well over a year. Additionally, some of the T. gondii released from cysts from the infected meat will penetrate more deeply into the wall of the cat’s intestine and multiply as yet another form, called a tachyzoite. This form then spreads from the intestine to other parts of the cat. Eventually, the cat’s immune system forces the parasite into a dormant or “resting” stage
where it forms cysts in muscles and the brain. These cysts contain slowly multiplying Toxoplasma organisms in yet another form, called a bradyzoite.

Other animals, including humans, are intermediate hosts of T. gondii and can become infected by eating cysts or oocysts. Oocysts passed in the feces of cats are not immediately infectious to other animals. Before becoming infectious, they must go through a process called sporulation, which takes one to five days depending on environmental conditions. Cat feces containing sporulated oocysts, however, serve as sources of infection, regardless of whether they are in litter boxes, gardens, or in sand boxes in which outdoor cats have defecated. Once an intermediate host ingests sporulated oocysts, the infection results in the formation of tissue cysts in various tissues of the body. Tissue cysts remain in the intermediate host for life and are infectious to cats, people, and other intermediate hosts that eat the cyst-containing tissue. In some cases, T. gondii tachyzoites may be excreted in the milk of infected cows and goats. See Figure 1 for an illustration of the life cycle of T. gondii. 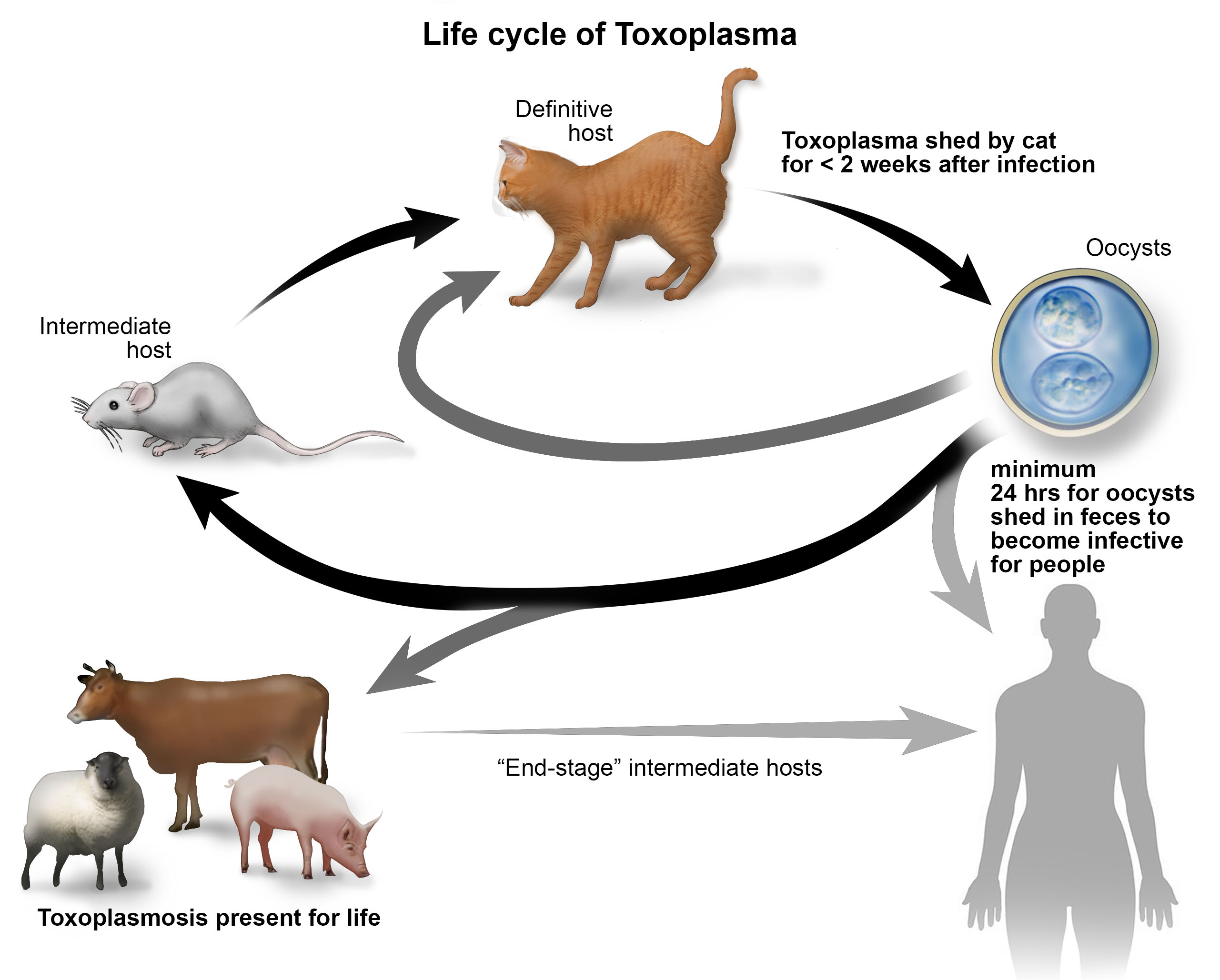 Clinical Signs
Most cats infected with T. gondii show no signs of disease. Occasionally, however, a clinical disease called toxoplasmosis occurs, often when the cat’s immune response cannot stop the spread of tachyzoite forms. The disease is more likely to occur in cats with suppressed immune systems, including young kittens and cats with feline leukemia virus (FeLV) or feline immunodeficiency virus (FIV).

The most common symptoms of toxoplasmosis include fever, loss of appetite, and lethargy. Other symptoms may occur depending upon whether the infection is acute or chronic, and the location of the parasite in the body. In the lungs, T. gondii infection can lead to pneumonia, which will cause difficulty breathing that gradually worsens. Infections affecting the liver may cause a yellowish tinge to the skin and mucous membranes (jaundice). Toxoplasmosis can also affect the eyes and central nervous system (CNS), producing inflammation of the uvea, or pigmented part of the eye (uveitis), the retina, or the space between the lens and cornea (the anterior chamber) (Figure 2), abnormal pupil size and responsiveness to light, blindness, lack of coordination, heightened sensitivity to touch, personality changes, circling, head pressing, ear twitching, difficulty chewing and swallowing food, seizures, and loss of control over urination and defecation.

Diagnosis
Toxoplasmosis is usually diagnosed based on a cat’s history, signs of illness, and laboratory test results. Measurement of two types of antibodies to T. gondii in the blood, IgG and IgM, can help diagnose toxoplasmosis. High levels of IgG antibodies to T. gondii in a healthy cat suggest that the cat has been previously infected and is most likely immune to the organism and not excreting oocysts. These cats are no longer sources of infection for other hosts. High IgM antibody levels, in contrast, suggest an active infection. The absence of any T. gondii antibodies in a healthy cat suggests that the cat is susceptible to infection and would shed oocysts for up to two weeks following infection.

The detection of oocysts in the feces is not a reliable method of diagnosis because they look similar to those of some other parasites. Additionally, cats can also shed oocysts for only a short period of time and often are not shedding oocysts when they are showing signs of disease. A definitive diagnosis requires microscopic examination of tissue samples for distinctive changes to the tissues and the presence of tachyzoites.

Treatment
Treatment usually involves a course of an antibiotic called clindamycin, either alone or in combination with corticosteroids if there is significant inflammation of the eyes or central nervous system. Treatment should ideally be started immediately after diagnosis and continued for several days after signs have disappeared. In acute illness, treatment is often started on the basis of high initial IgM antibody levels. If clinical improvement is not seen within two to three days, the diagnosis of toxoplasmosis may be questioned.

Prognosis
The prognosis for cats diagnosed with toxoplasmosis depends upon the organs or systems affected, the time between infection and treatment, and initial responses to therapy. Generally, cats with CNS and eye symptoms respond to therapy more slowly, but they still have more favorable prognoses if their clinical signs improve within 2-3 days of starting therapy. The prognosis for cats with toxoplasmosis affecting the liver or lungs is usually poor.

Prevention
Reducing the incidence of toxoplasmosis in cats requires measures to reduce both exposure to infective oocysts and shedding of oocysts into the environment. Cats should preferably be fed commercially prepared, cooked foods (appropriate heating inactivates any T. gondii cysts that may be present) and should not be allowed to eat uncooked meat or intermediate hosts, such as rodents. They should also be denied access to facilities housing food-producing livestock and food storage areas.

Because cats only shed the organism for a short time, the chance of human exposure via cats they live with is relatively small. Owning a cat does not mean you will be infected with Toxoplasma. Since it takes a minimum of 24 hours for T. gondii oocysts in cat feces to sporulate and become infective, frequent removal of feces from the litter box, while wearing gloves and washing hands afterward, minimizes the possibility of infection. It is unlikely that you would be exposed to the parasite by touching an infected cat, because they usually do not carry the parasite on their fur. It is also unlikely that you would become infected through cat bites or scratches. Indoor cats that do not hunt prey or consume raw meat are unlikely to be infected with T. gondii. In the U.S., people are much more likely to become infected by eating raw meat and unwashed fruits and vegetables than by handling cat feces. The possibility of infection after gardening in soil that has been contaminated with cat feces also exists, and this possibility can be mitigated by wearing gloves and by washing hands after gardening.

Pregnant women and immunodeficient individuals are the two populations most at risk of developing health problems after T. gondii exposure. In utero infection is of the greatest concern in humans. Between one-third and one-half of infants born to mothers who acquired Toxoplasma during pregnancy are infected. The vast majority of women infected during pregnancy have no symptoms themselves, and the majority of infected infants will show no symptoms of toxoplasmosis at birth. Many of these children, however, are likely to develop signs of infection later in life, including loss of vision and hearing, mental retardation, and, in severe cases, death.

In people who are either undergoing immunosuppressive therapy or have an immunosuppressive disease such as acquired immunodeficiency syndrome (AIDS), toxoplasmosis may cause enlargement of the lymph nodes, eye and central nervous system disturbances, respiratory disease, and heart disease. In these patients, especially those with AIDS, relapses of the disease are common, and the mortality rate is high.

Immunodeficient people and pregnant women were advised to avoid cats in the past; however, the CDC now advises that this is not necessary. Please refer to the CDC’s website for its most recent recommendations regarding the risk of toxoplasmosis to humans.

For answers to specific questions regarding toxoplasmosis infection in people, please consult with your health care professional.

There is no vaccine to protect against toxoplasmosis in animals or humans. 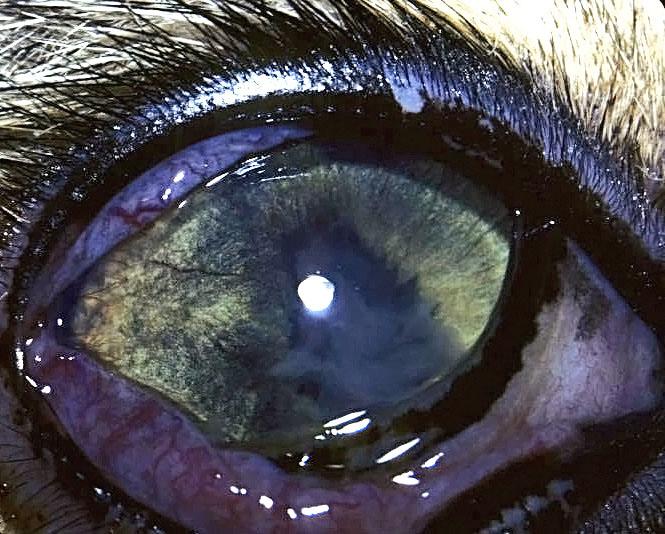 Figure 2: Uveitis in a cat with toxoplasmosis. Note the irregular shape of the pupil, the opaque, smoky appearing material obscuring the pupil, and the dark discoloration of the uvea (greenish tissue surrounding the pupil) caused by the accumulation of inflammatory cells in these regions.

Steps that can be taken to minimize Toxoplasma infection in order of importance:

Call Us Text Us