At Coastal Sunrise Animal Hospital we strive for a warm and friendly relationship with you and your pet. This page highlights the staff – our training, experience, and dedication to veterinary medicine. 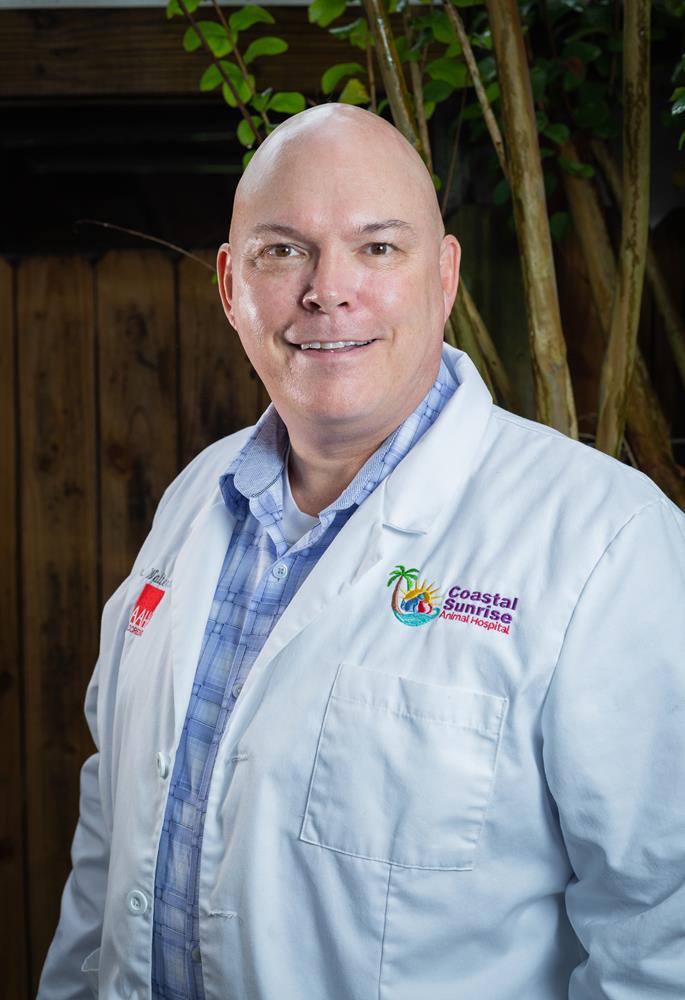 Dr. Walter Gandy is a 21 year veteran of the U.S. Army who faithfully served tours as an officer in both Kosovo and Iraq. After his service, he followed his dream of animal medical care by graduating from one of the nation’s premier Veterinary colleges at Louisiana State University. Walter has many family ties to Pensacola and has spent much time here in the Pensacola area over several decades.

See more about Dr. Gandy when he was featured by Nationwide Insurance while he was in Veterinary School at LSU. nationwidedvm.com/lsus-walt-gandy 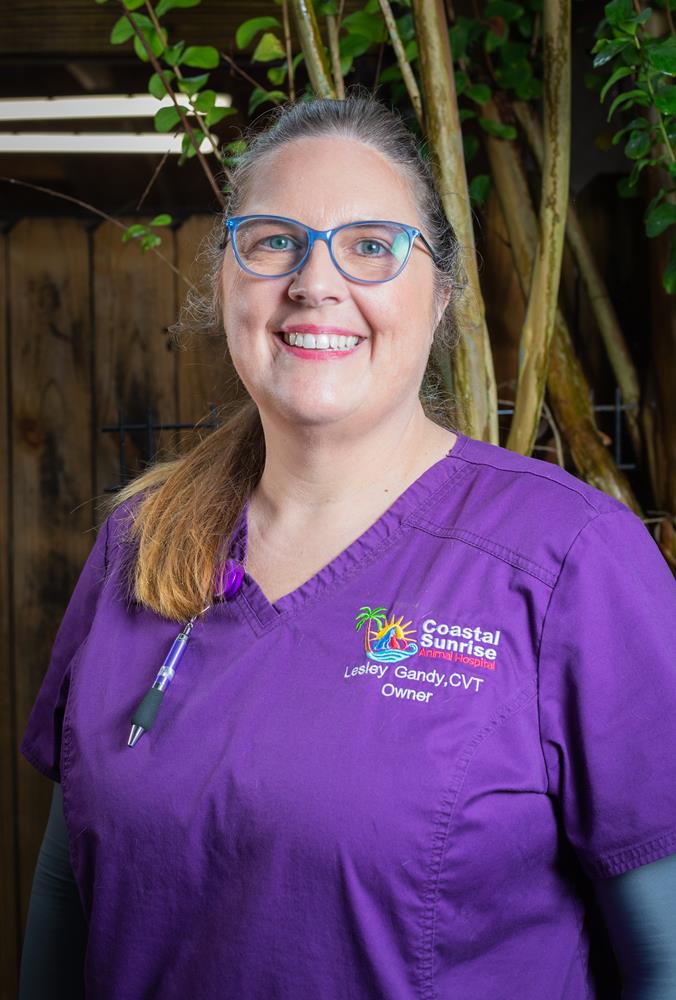 Lesley Gandy is a certified veterinary technician in Florida and a registered veterinary technician in Louisiana. She studied at Baton Rouge Community College and did her clinicals at Louisana State University. She also has Bachelor of Computer Science from the University of Maryland Heidelberg, Germany campus. She also worked as a technician at LSU in the exotics department, internal medicine, rehabilitation department and large animal reception. She has enjoyed owning a farm in the past where she and her husband raised sheep, goats, ducks, chickens, rabbits, fish, and of course dogs and cats. She is presently a mother of 4 grown children and grandmother to 5. 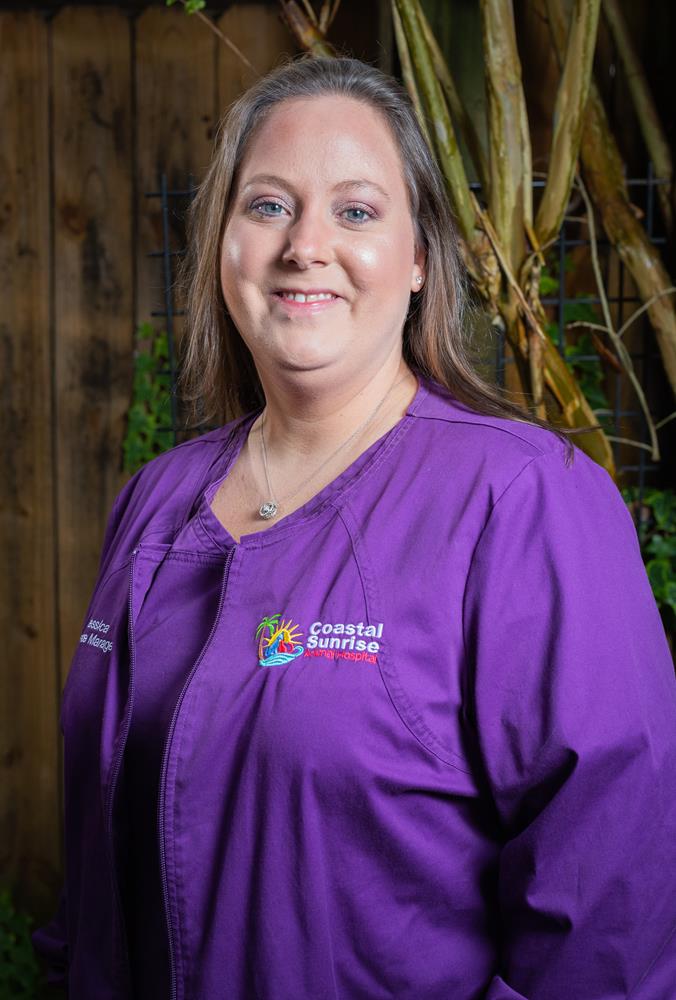 Jessica is a native of Virginia Beach, VA and was also a resident of the New Orleans area for 10 years. She has worked as a stable manager at a Hunter/Jumper Equestrian Facility and as a Veterinary Technician at Ark Animal Hospital on the east bank of New Orleans. Jessica has been a resident of the Pensacola area off and on since 1995. She has traveled to different areas due to her husband, Eddie being a Marine Corps veteran. Jessica has a husband of 20 years, Eddie, a son, Edward, and a daughter, Lauralai. At home they have an African Grey parrot named Chipper, a Maltese mix named April, 15 chickens, a duck and lots of fresh and saltwater fish. Jessica enjoys spending time with her family and pets. She has a huge passion for horses and motorcycles and tries to ride as often as possible. 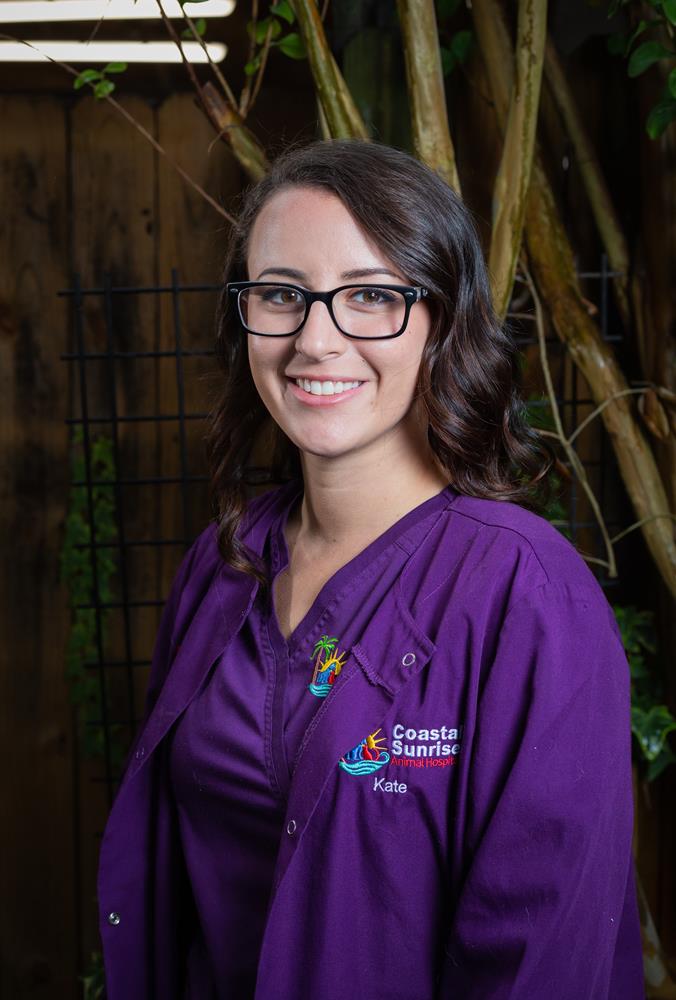 Kaitlyn Leopard was born and raised in Gulf Breeze, FL. After graduating from Gulf Breeze High School she soon moved out to Pensacola. She worked as an Assistant Manager at Zaxby’s for four years and as a General Manager for 1 year before deciding to switch occupations. Since getting engaged in May of 2018 she sought out a new career. She is very excited to now be a part of the Coastal Sunrise Animal Hospital team as a receptionist. Her interests are hanging out with family, going to the beach and hiking with her two dogs Hendrix and Niko. 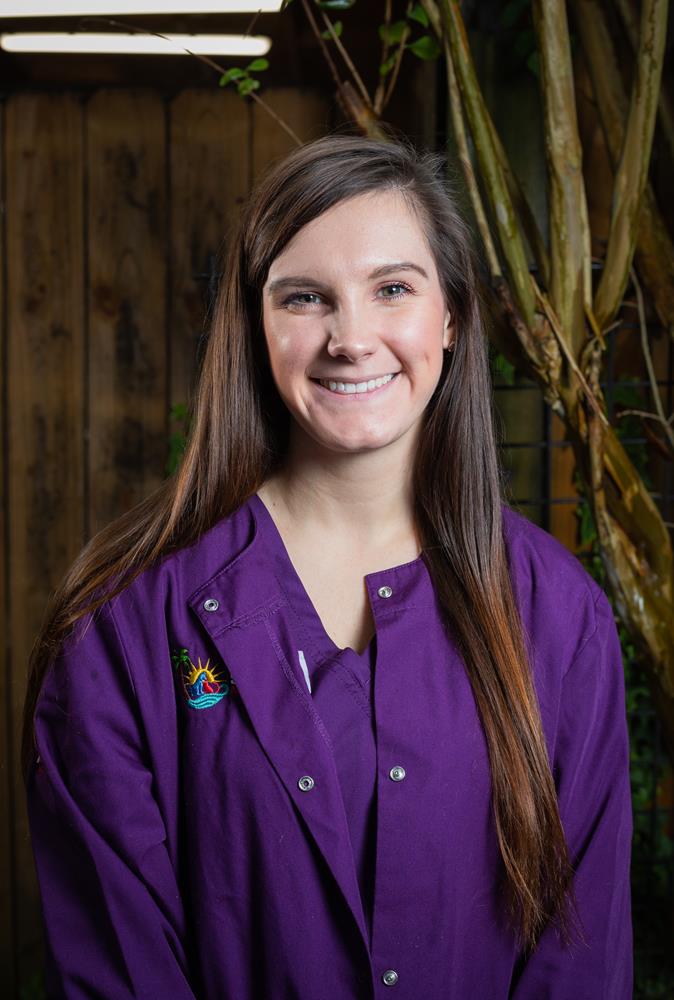 Liz Jones is originally from Ohio and has lived in Florida for the past 8 years. She has been working in the field since 2016 when she recognized her love for animals after adopting her first four legged kiddo. Currently a student at The University of West Florida, Liz hopes to always be involved in the animal community. Her hobbies include traveling, yoga, and obviously hanging out with her dog, Ollie. 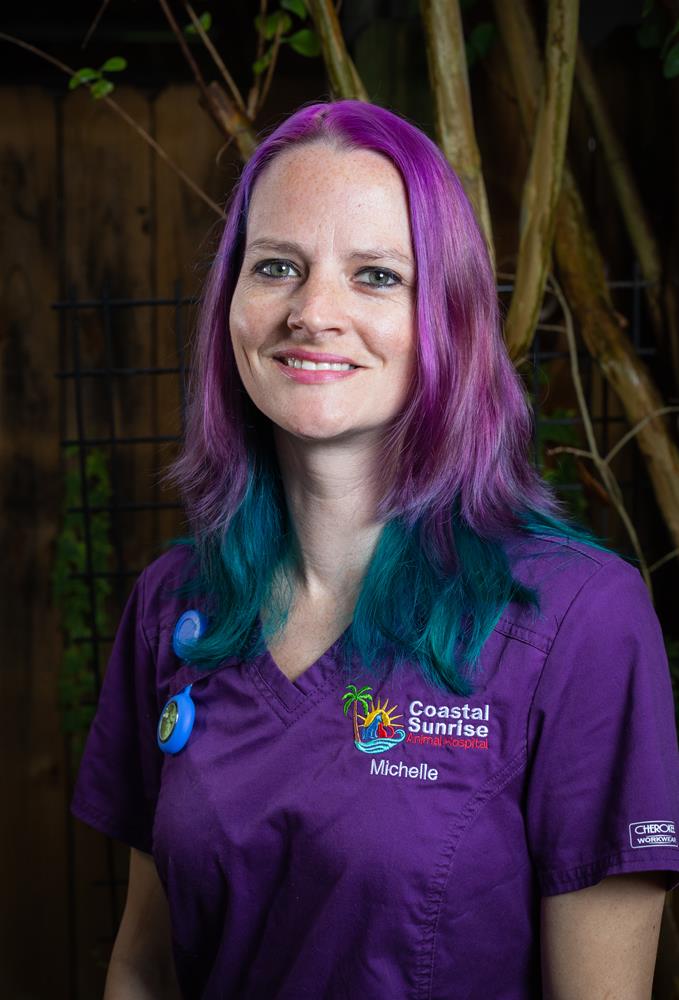 Michelle was born in Pennsauken, New Jersey and was the only girl of four children. Her family moved to West Palm Beach, FL when she was 13 years old. She became a veterinary technician after graduating high school in 2002 and moved to Pensacola in 2008. Her areas of interest in veterinary medicine are surgery and radiology. Her personal interests are hockey, running, and being outdoors with her young son, Lucas, and their new puppy, Finley (AKA Shark Fin). 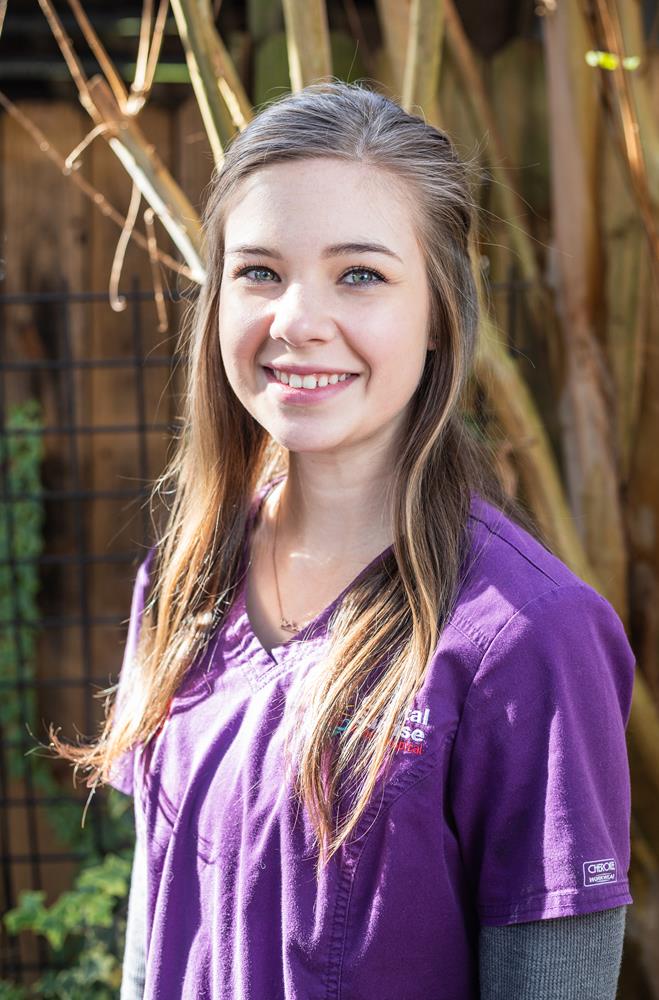 Rachel is a Pensacola native who found her passion for animals at a young age by adopting a few cats throughout her childhood and volunteering periodically. She joined our team in December of 2018 as a Veterinary Nurse, where she takes pride in caring for your furry loved ones. Her previous experience has been as a Pet Resort Attendant at another area hospital where she began working in all areas of the hospital and eventually worked her way up to being a Veterinary Nurse. Rachel received her Associate’s Degree in Biology at Pensacola State College and is working towards the goal of continuing her education in the veterinary field. In her spare time, Rachel enjoys reading, going to the movies, and spending time with her rescue cat, Nacho and rescue dog Max. 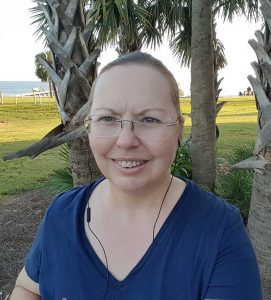 Val Mullins started her career in the animal industry in 1984 going to work for Dr. James Scott at Arctic Animal hospital in Anchorage Alaska where she was employed as a kennel technician. Finding that she had an affinity working with animals she continued in the veterinary industry and went to work in 1987 for Dr. Michael T. McCreight in Seminole Oklahoma at the Seminole Veterinary Hospital. It was while working for Dr. McCreight that she began what was to be a long grooming career which started out working with the animals that were difficult or had been refused at regular grooming facilities. Upon meeting her husband, she moved to Pensacola and in 2004 she solely worked as a professional pet groomer. With nearly 30 years of pet grooming experience and a background knowledgable in veterinary services and care.

Font Resize
Contrast
Accessibility by WAH
Call Us Text Us