The cranial cruciate ligament (CCL) is the major stabilizing ligament that lies deep within the canine knee joint. Rupture or tear of this ligament is a very common injury in the hind legs of dogs. Rupture of the CCL causes a forward thrust, also known as a sheer force, of the tibia when the dog is in motion or even just weight bearing. The image below illustrates the nature and consequence of rupture of the CCL. 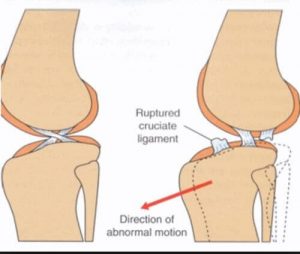 The sheer force causes inflammation and pain within the joint and causes significant lameness in the affected limb. CCL rupture will not heal without surgical stabilization. The longer a dog lives with a CCL tear, constantly shifting weight to the non-injured limb, it increases the chance of CCL tear in the other limb.

There are three main methods by which dog knees with torn CCL’s are surgically stabilized. One approach involves running a suture between focal points of the femur and tibia. Suture procedures still have their place in CCL repair, but it is widely accepted that suture based CCL repair is not as effective for dogs over 35-38 pounds. At Coastal Sunrise Animal Hospital, we enjoy successful outcomes using the suture procedure for CCL tears in smaller dogs.

Large breed dogs will tend to place a great deal of force across the knee joint that sometimes leads to suture failure. Also, certain large breed dogs are born with steep tibial head angles (called tibial slope – more on this below) that predispose the dog to the injury in the first place, that will subsequently fight against the suture for the life of the dog. Thus, procedures called osteotomies are generally the preferred method of repairing CCL injuries in large breed dogs. Osteotomy refers to procedures that require the cutting and altering of long bone structures.

In the 1990’s, a procedure was developed by an Oregon based veterinarian called the tibial plateau leveling osteotomy, aka, TPLO. The procedure involves cutting a wedge of bone out of the head of the tibia, rotating it a predetermined number of degrees, and plating in place. This changes the physics of the knee by altering the angle of the surface of the head of the tibia (aka, tibial plateau), whereby the sheer force created by the injury is converted into a compressive force oriented toward the vertical axis of the femur. The resulting compressive force is not painful for the dog and successfully stabilizes the knee when the dog is weight bearing or in motion (stay tuned for more on the compressive force, as this is an important consideration). The subsequent reduction of the tibial slope accomplished by the TPLO also accounts for the aforementioned certain breeds that have steep tibial slope angles that predispose to CCL injury. The x-rays below show pre and post operative TPLO images.

Although it was invented in the United States, TPLO at first gained more momentum in Europe as the procedure of choice for CCL tear in medium to large breed dogs. It started to gain momentum in the US in the early 200o’s and has generally presently become the CCL repair method of choice among veterinary colleges and the majority of veterinary surgeons. But hold that thought, there is much more to come!

In 2005, a procedure known as the Tibial Tuberosity Advancement (TTA) was developed where the top part of the tibia, called the tibial tuberosity, is cut and advanced forward. The result is two fold:

2.) The advancement of the tibial tuberosity lengthens the patellar tendon thereby decreasing its angle relative to the tibial slope. The result is that the deep tibial slope angles are functionally reduced without the necessity to change the angle by cutting such a large wedge of bone as is the case with TPLO. Overall, TTA was considered by many veterinary surgeons to be less invasive and found that patients were quicker to weight bearing and experienced less complications. What’s more, the procedure had a shorter learning curve than TPLO, so veterinarians without residency training were able to quickly gain proficiency with the procedure. 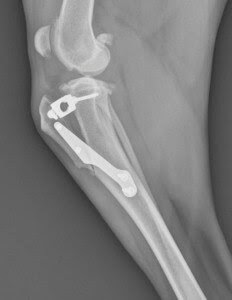 I am not really certain why veterinary colleges never really embraced the TTA as a mainstream CCL repair procedure performed at veterinary college teaching hospitals. Despite the European veterinary community making a strong transition away from TPLO to TTA after its inception in 2005, while many private US veterinary surgeons were adopting TTA as their go to procedure, US based veterinary schools stuck with TPLO.

Enter the Modified Maquet Preocedure, aka, MMP, developed in England and first introduced in the US in 2014. The MMP procedure utilizes the same principles as the TTA, however, with less cumbersome hardware, smaller incision, and shorter surgical time. The wedge that is placed within the bone does not require multiple screws to be placed into the bone as the TTA and TPLO hardware does. Once placed, it simply requires the placement of one single pin and and staple that effectively hold the hardware in place. What’s more, the MMP wedge is made of a porous titanium alloy that allows bone to grow through it. This results in much faster recovery times of 4-6 weeks (as opposed to TPLO and TTA that are 10-12 weeks). See the images below for a post operative MMP x-ray and an image of the actual hardware used in the procedure: 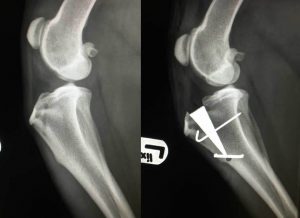 Let’s return to TPLO for one moment before I close. Remember I wrote about converting the sheer force into a compressive force? No, it is not painful and, yes, it stabilizes the knee, but it is not without consequence. Over time that compressive force leads to earlier stage degenerative joint disease of knees surgically repaired via TPLO as compered to TTA and MMP. Also, look back at the TPLO x-ray and oberve the metal structures across the surface of the leg….those are skin staples necessary to close the skin and give you an idea of the size of the incision. That represents an 8-10 inch incision versus MMP that requires typically no more than a 3-4 inch incision.

I am enjoying quicker return to function, by far faster recovery times, and excellent results with the MMP procedure for repair of the CCL in dogs that I have been performing the surgery for since completing the training. The standard TTA and TPLO remain good procedures especially in the hands of an experienced veterinary surgeon, but in my view, MMP is currently the best CCL repair procedure for dogs over 38 pounds that have suffered CCL tears.

Dr. Roger Welton is a practicing veterinarian and highly regarded media personality through a number of topics and platforms. In addition to being passionate about integrative veterinary medicine for which he is a globally recognized expert, Dr. Welton was also an accomplished college lacrosse player and remains to this day very involved in the sport. He is president of Maybeck Animal Hospital, general partner of Grant Animal Clinic, and runs the successful veterinary/animal health blogs Web-DVM and Dr. Roger’s Holistic Veterinary Care. Dr. Welton fulfills his passion for lacrosse through his lacrosse and sport blog, The Creator’s Game.

Call Us Text Us